There are so many things that Japanese people take for granted and foreign people feel amazed.

I’ll talk about the toilet in Japan, which is in the top ranking of the things that the foreign visitors have been amazed by the most!

Since it’s going to be a little long, I’ll share it in two days.

This function was invented from Japanese women’s voices, saying that they get so embarrassed if the sound that they make in the toilet is heard by people in the first place.  Yes, being embarrassed is a Japanese culture, isn’t it?  It began being sold in 1988.  I’ve heard that Japanese women used to flush a couple times to hide the sound they make in the toilet before it was sold.  Say, if about 400 Japanese women work in a company, 3,900,000 yen (≒US$32,268.60) of the water bill could be saved with “Oto Hime”! 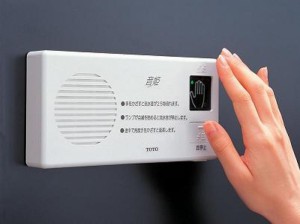 It has become a Japanese necessity to “wipe our bottoms with water”, instead of with “toilet paper”!

Also, it has been so popular among celebrities from overseas, such as Madonna who said, “I came here to see the toilet” when she visited Japan. Will Smith also got addicted to using it, and Leonardo DiCaprio was so impressed by it that he bought it and brought it back home… 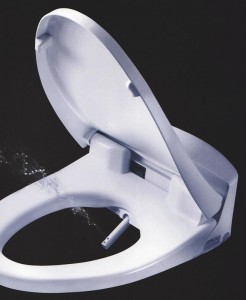 They might be a little awkward and possibly wasteful to you, but they have become a must for Japanese people.

Especially, many Japanese people are so addicted to the “Wash let” that they even bring a palm-sized “Portable Wash let” with them, when they go abroad.

So in the next blog, I’ll share more information about the “Automatic and Warm Toilet Seat” and Japan’s “Cleanliness” with you.